(Toronto) This Saturday, April 27 thousands of workers and supporters are taking to the streets of Montreal to demand the Harper government withdraw its recent changes to Employment Insurance. Similarly, protesters in New Brunswick and Nova Scotia among others are calling on Ottawa to “Scrap the EI Changes.”

Inspired by these actions, the Toronto-based Good Jobs For All Coalition has announced the launch of its own campaign in the Greater Toronto area. “The impact of the EI changes will be felt right across Canada in many sectors and in big cities as well as rural areas. It’s not just an issue for Quebec and Atlantic provinces. These changes will be acutely felt here in the GTA too,” Coalition co-chair Tam Goossen said.

The Good Jobs Coalition which represents more than 30 community and labour organizations in the Greater Toronto Area has also sent a message of solidarity to the demonstrations in Montreal and Edmundston, New Brunswick. The Coalition identifies the attack on workers’ EI rights as “part of a cheap labour agenda creeping like a cancer into the fabric of our society” including the government’s new anti-union legislation and green light to lower wages for Temporary Foreign Workers.

The message ends with support for future actions “that convey a strong and united message to Scrap Harper’s EI Changes. And Fix EI.”

A petition on the Coalition’s website calls for:
• Better access to EI especially for those in precarious jobs. This would require an overhaul of the EI Hours system with a new qualifying minimum of 360 hours;
• Improved benefit rates;
• Extended benefit weeks to provide continued income benefits for workers in approved training programs, among others.

Just when it seemed safe to put Jim Flaherty’s surprise-loaded 2012 budget behind us, it delivered a nasty aftershock.

Labour activists knew it was coming, but most Canadians didn’t. Buried in last spring’s 425-page omnibus budget legislation was a change in employment insurance (EI) rules that will hurt thousands of laid-off workers. It took effect on April 7.

Unions and community groups pleaded with the government not to implement the measure. They failed. So last Sunday, employment insurance benefits in two-thirds of the country were quietly reduced. Existing recipients were spared but new EI claimants — starting with the 54,500 workers who lost their jobs in March — will be subject to tougher rules. Most will get less support.

Generalizations are impossible. The impact on any person depends on his or her employment record, skills and the health of the local job market. But by and large, EI applicants in Oshawa, Windsor, Hamilton, the Niagara region, Sudbury, Halifax, Montreal, Winnipeg, Regina and Vancouver will fare worse under the new rules. (The effect in Toronto will minimal because EI claimants here never received the same benefits as their counterparts in the rest of the country.)

Systemic marginalization creates barriers to a living wage for many workers in Canada. In particular, women workers, and those who are racialized, immigrant, Aboriginal, living with disabilities or similarly disadvantaged are all segregated into low wage job ghettoes—their work systemically devalued. A recent report from the Canadian Centre for Policy Alternatives argues that governments and employers need to deliver more equitable compensation incomes for vulnerable workers. The report states that the right to work and earn a living wage free of discrimination is a basic human right.

Part of the Social Justice Week at Ryerson 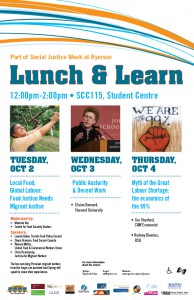 Decent Work: Decent Lives for All

A week of events, speakers, exhibit and cultural events to transform Ryerson into a hub of social justice and solidarity in Toronto

Contract cleaners hired to look after Toronto police stations are being paid roughly minimum wage, contrary to previous reports that pegged average wages at more than $17 an hour.

Under budget pressure, the police service in early 2011 proposed looking at contracting out cleaning. At that time, the staff briefing note on the subject said contract cleaning rates average $17.60 an hour.

The committee members were urged to vote against awarding a two-year contract extension worth $3.9 million to Impact Cleaning Services to service 25 police facilities.

“These are poverty wage jobs, that’s the bottom line,” said Preethy Sivakumar, coordinator of the Good Jobs For All Coalition, representing labour and community groups. 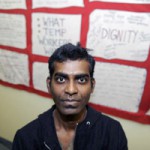 Why Canada must get rid of its ‘bad jobs’

Last May federal Finance Minister Jim Flaherty said there was no such thing as a bad job. The Law Commission of Ontario may disagree.

This week it put out a report about the rise in vulnerable workers and precarious jobs. Now that he’s heard from executives who think Canadians are paid too much, Mr. Flaherty should consider the other side of the story, and the suggested fix.

Most of us rely on our jobs as our main form of economic security, but gradually the market has been shifting away from jobs offering reliable incomes and benefits.

More than 1 in 5 jobs in Ontario (22 per cent) are defined as “precarious” today. Precarious jobs combine low rates of pay with part-time or highly variable hours of work, and no benefits or pensions. If you’re a woman, a visible minority, or a recent immigrant, there’s considerably more than a one-in-five chance that a precarious job is waiting for you.

Since the recession, four out of five jobs added to the job market in Canada have been temporary or contract work (see attached graph). Add to that a new federal policy thrust that has dramatically increased temporary foreign work permits for migrant workers, particularly in low skilled job categories. Sadly, some employers have been exploiting the fact that many workers find themselves in no position to complain.