The presentation is now available from the December 12, 2018 forum:
“What’s the story with the Google Toronto Sidewalk Lab Project?”

In Ontario’s 2018 provincial election, we need to continue taking action against climate change. 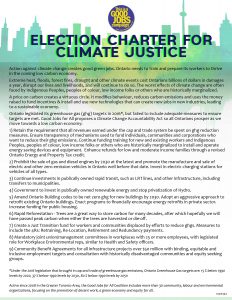 The Good Jobs for All Coalition created the Election Charter for Climate Justice to support action now and after the election on June 7th. It contains nine great measures to be included in a proposed Climate Change Accountability Act.

Use the Charter at all-candidates meetings, in letters to the editor, on your doorstep when candidates ask for your vote, and in other ways you use to take action.

Here are three questions you can ask candidates and parties: 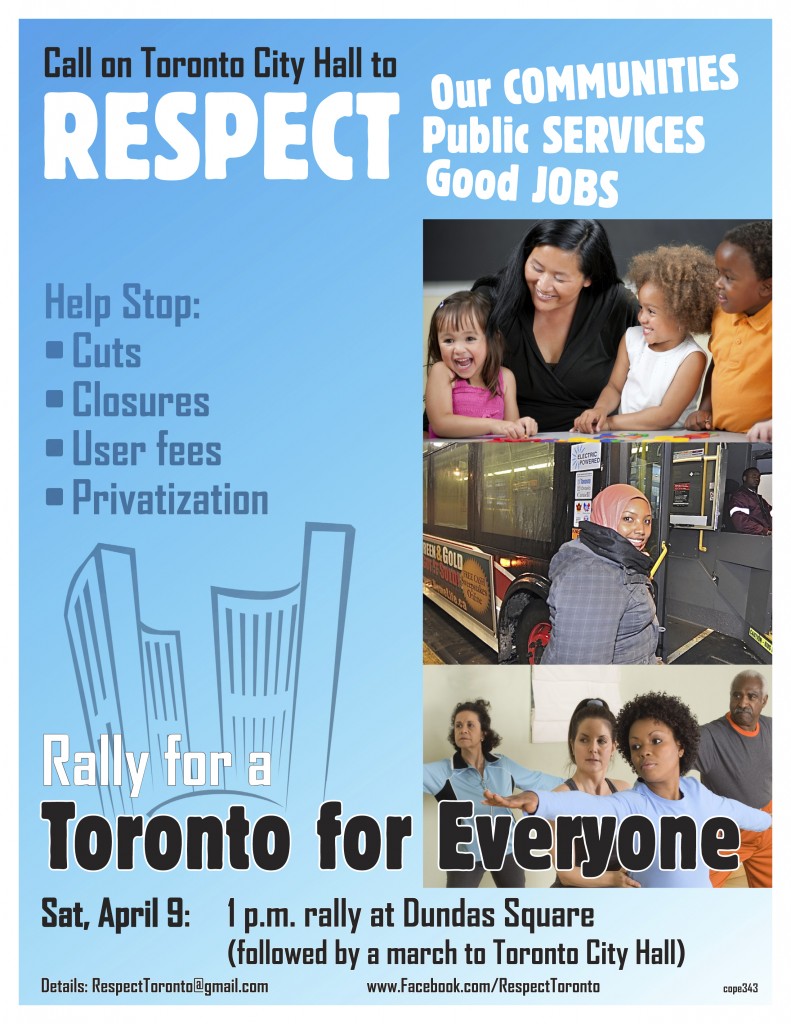 The proposed 2011 City Budget was released at City Hall this week. This year, the City will consider its Capital, Operating, Water and Solid Waste budgets together and in a shorter period of time.

Over the next three weeks, the Budget Committee and Council will debate, make changes and approve the budget. Your input can make a difference.

The 2011 proposed budget has been balanced by drawing on our savings (reserves), reducing services and using the one-time surplus of $350 Million from 2009 and 2010.  With a tax increase of 0% and the elimination of $64 million in revenue from the Personal Vehicle Tax, the City has fewer ongoing revenues to build a sustainable budget for the future.

The following is a summary of some of most important features of the proposed 2011 Budget.

Public Library
•    The Urban Affairs Library at Metro Hall will be closed, and the collections and staff moved to the Toronto Reference Library.
•    The number of books purchased for circulation will be significantly reduced, meaning you will wait much longer to borrow some books

Transit
•    The TTC has proposed reducing the service on 48 routes, including the 62 Mortimer Bus after 10pm on weekends and holidays.
•    Fares may be frozen if the City and TTC can find $24m in cuts elsewhere in the budget to offset the cost

A Canada-EU free trade deal would create a huge trade deficit for Canada, resulting in the loss of up to 150,000 Canadian jobs, says a study released today by the Canadian Centre for Policy Alternatives (CCPA).

END_OF_DOCUMENT_TOKEN_TO_BE_REPLACED

The Toronto Mayoral Candidates Racial Justice Report Card was released earlier this month and is compiled of one-on-one interviews with each of the candidates, as well as a thorough review of policy and platform positions and assorted media coverage of the campaign up to late September.

END_OF_DOCUMENT_TOKEN_TO_BE_REPLACED

TEA has evaluated and graded over 200 council candidates in all wards of the city based on answers to our survey about their environmental commitment.

END_OF_DOCUMENT_TOKEN_TO_BE_REPLACED

Municipal decisions shape our everyday lives, from the quality of our public services to the health of our environment.   It’s important we get involved.

Here are five ways you can take action.