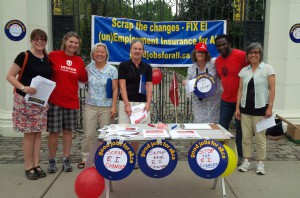 (Toronto) This Saturday, April 27 thousands of workers and supporters are taking to the streets of Montreal to demand the Harper government withdraw its recent changes to Employment Insurance. Similarly, protesters in New Brunswick and Nova Scotia among others are calling on Ottawa to “Scrap the EI Changes.”

Inspired by these actions, the Toronto-based Good Jobs For All Coalition has announced the launch of its own campaign in the Greater Toronto area. “The impact of the EI changes will be felt right across Canada in many sectors and in big cities as well as rural areas. It’s not just an issue for Quebec and Atlantic provinces. These changes will be acutely felt here in the GTA too,” Coalition co-chair Tam Goossen said.

The Good Jobs Coalition which represents more than 30 community and labour organizations in the Greater Toronto Area has also sent a message of solidarity to the demonstrations in Montreal and Edmundston, New Brunswick. The Coalition identifies the attack on workers’ EI rights as “part of a cheap labour agenda creeping like a cancer into the fabric of our society” including the government’s new anti-union legislation and green light to lower wages for Temporary Foreign Workers.

The message ends with support for future actions “that convey a strong and united message to Scrap Harper’s EI Changes. And Fix EI.”

A petition on the Coalition’s website calls for:
• Better access to EI especially for those in precarious jobs. This would require an overhaul of the EI Hours system with a new qualifying minimum of 360 hours;
• Improved benefit rates;
• Extended benefit weeks to provide continued income benefits for workers in approved training programs, among others.